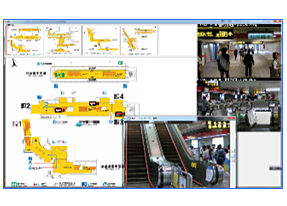 The Taipei MRT Circular Line is a self-built engineering project hosted by the Department of Rapid Transit Systems (DORT) of the Taipei City Government, which manages the planning of the MRT lines in the Metropolitan Taipei Area, an area that sees the densest convergence of MRT lines in Taiwan. The Circular Line squats across both the Taipei City and the New Taipei City, and is subdivided further into South Ring, North Ring and West Ring sections, adding up to a total rail length of 34.8 kilometers. The Wet Ring section is currently under construction, having a total rail length of 15.4 kilometers and wound up with 14 stations and a depot, proudly connecting Xindian, Zhonghe, Banqiao and Xinzhuang areas. and is expected to be completed by the end of December 2018.

Project Requirements
Implement the design and installation of a Video Surveillance System in the operation control center, metro trains, depots as well as key surveillance points along the Taipei MRT Circular Line, thus enabling a realtime surveillance capacity that can be executed from either the control center or the station offices, with a well-informed display of alarm info from parties beyond the system. Take the System design into good consideration for the expandability and integrability of both hardware and software well into future MRT line extensions.

● Video Surveillance System
Realtime surveillance, together with map displays, equipment status and alarm notifications, can be executed from the system operator interface within the Operation Control Center and Station Offices, to facilitate a first-timing response capability for the management.

● Video Recording Management System
At each station, depot and key surveillance points along the Circular Line will be installed the video recording equipment to implement video surveillance & recording in target areas. Video streaming can be forwarded to remote surveillance workstations for realtime event monitoring. Built-in camera positioning feature allows an optimal angle and position that are linked to fire alarm or IO trigger for a fully optimized event recording.

Benefits
Objectives of both system compatibility and cost benefit for the Circular Line can be achieved by installing, in the Operation Control Center as well as in each station, a custom-built surveillance platform that allows not only a first-timing response to any security event but also future expansions with subsequent system software & hardware integration along the extension lines.

Have a question or need any assistance that should be answered by a professional? Contact us, and let our staff help you.

You can find out more about which cookies we are using or switch them off in settings.

This website uses cookies so that we can provide you with the best user experience possible. Cookie information is stored in your browser and performs functions such as recognising you when you return to our website and helping our team to understand which sections of the website you find most interesting and useful.

Strictly Necessary Cookie should be enabled at all times so that we can save your preferences for cookie settings.

If you disable this cookie, we will not be able to save your preferences. This means that every time you visit this website you will need to enable or disable cookies again.